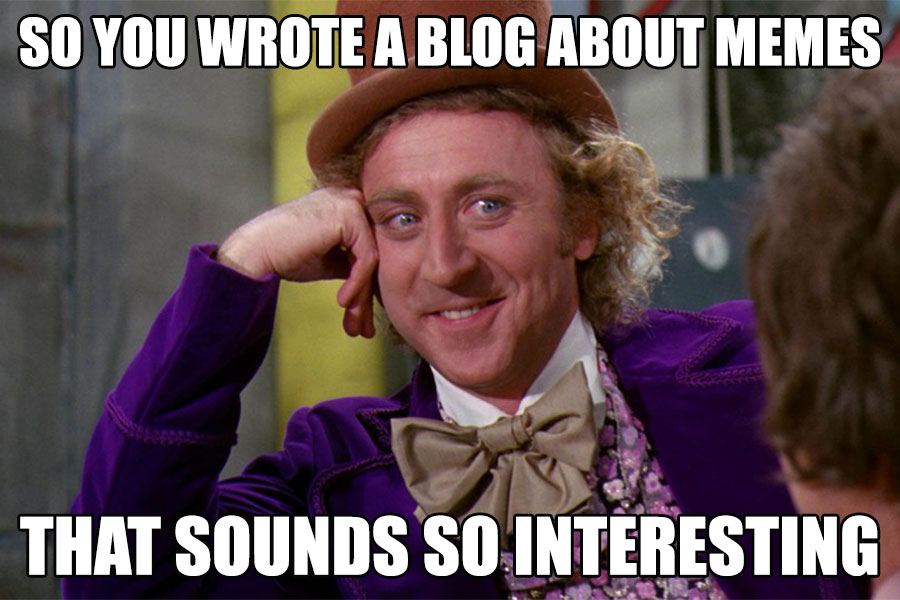 … is probably the only sentence looping through every celebrity’s mind during a public appearance.

It’s one of the most damning digital trends that many people can’t shake off. Whether you’re famous or not, an ill-timed photograph or throw away comment can catch fire when you least expect it. Going viral is one of the main goals for many marketers, but for some being the subject of a viral meme is a poison chalice.

So what is a meme. How is it pronounced? Me-me? Mehm? Meh-meh? No, it’s pronounced ‘meem’ and we’re going to take a look at what they are, where they originated.

I was looking around for where the word first appeared and it seems that Richard Dawkins in 1976 coined the phrase in his book The Selfish Gene. He referred to a word derived from Greek which means ‘to imitate’. This word, Mimeme, was abbreviated to meme so that it would sit in line with gene.

It was essentially used to describe the way in which ideas were spread through generations. So basically a meme is the idea equivalent of a physical gene. A meme’s similarity to genes isn’t just in the sound of the pronunciation but also in the way it is subject to evolution and therefor natural selection – ideas changing meanings and evolving into something completely different due to the influence of the environment.

So memes have been around for much longer than the internet. Things like the Sator Square have been around since ancient Rome (or Pompei) and appeared in a number of cultures throughout the centuries. Then you have the Frodo Lives movement in the 1970s – in homage to the Tolkien character. These ideas have woven their way into the tapestry of culture and evolved to hold different meanings throughout the timeline.

Remember the digital dancing baby (aka Baby Cha-Cha), well this little digital piece of animation is often labelled the first internet meme and has been credited to a LucasArts employee back in 1996. There was also the Hampster Dance from 2000 which has been similarly influential in the development of further memes.

You will notice that I’m not embedding any of these links into this blog – this is on purpose, if you click on a video you WILL watch it – so I thought I’d give you the links so you can enjoy at your leisure, or when more appropriate.

The LOLCats series of memes focused on pictures of cats (a youtube and general internet gold mine) and gave them captions with questionable spelling – for some reason they are hilarious and I am more than a bit ashamed that in researching this article I ‘lolled’ a great number of times.

One of my favourite series of memes is the ‘Ermahgerd’ series. Now, I have just found out that this is “a facetious mispronunciation of “Oh my God” intended to mimic the speech of someone wearing an orthodontic retainer” [wiktionary]. You don’t have to go too far on the internet to find a good example of this meme, you don’t even need to spell ‘ermahgerd’ correctly – but please take a moment to look them up.

The meme has taken off – largely due to social media influence over the last ten years. With Twitter and Facebook dominating early on and Instagram contributing to the chaos one false move by a celebrity will render them more famous for the meme than their fame granting talent. Some of my favourites:

There are many more but I’d be here all day and I have work to do. I really recommend Know Your Meme if you want to look up the origin of some of your favourites.

If you would like to speak to me about your marketing requirements or are interested in finding someone to handle your blogging and social media management activities, make sure you get in touch. You can call me or email me via the contact page. You can also follow me on Facebook, Instagram, Twitter and LinkedIn. You’ll notice from my social media that I do NOT practice what I preach – I’m far too busy doing the work for other clients.